Technology-Based Startups (TBSs) are newly emerged entrepreneurial ventures typically launched by a team with the purpose of bringing innovative products or services to market. Today, it is widely recognized that TBSs play a very important role in the economy as a source of disruptive and radical innovations and creation of new jobs.
However, most TBSs face significant challenges associated with conflicts among team members and with changes in the environment, which affect their innovation performance and survival. This thesis proposes the concept "Team Collaboration Capabilities" (TCCs) referred to the interaction among TBS team members as an essential organizational condition to allow the construction of new strategic dynamic capabilities. We consider four elements as the main dimensions of TCCs: trust, communication, problem-solving and team efficacy. In particular, the thesis focuses on the relationships between TCCs, operational capabilities, and innovation performance. The empirical study draws on 45 valid responses of TBSs. Most of the companies in our sample were participants in accelerator programs. The data analysis uses structural equation modeling (SEM) as a technique that allows a component-based estimation for cause-effect modeling with latent variables. The findings suggest that the development of TCCs in TBSs contribute to building new operational capabilities that result in greater innovation performance. We also propose future lines of research for the role of TCCs in external collaborations. For example, to assess public initiatives that take into account the critical phases of TBSs development, the promotion of talent attraction and the furtherance of compensation schemes that retain it. Finally, it would be interesting to study the collaboration between the TBSs and other external agents in open innovation projects. We believe that these collaborations would favor their survival and competitiveness.

Anna Karina López Hernández, originally from Mexico City, obtained a B.A. in International Relations and International Business at Universidad Nacional Autónoma de México (UNAM). Followed a Master in International Marketing at Universitat de Girona, focus on Marketing with Cause. After she finished her studies, she worked as an entrepreneur, marketing and consulting services. Since 2011 she had been awarded a scholarship by the National Council of Science and Technology (CONACyT,) for Ph.D. Studies She started a Ph.D. (first year) in Climate Change Studies in Scotland, United Kingdom (Oct 2011 – Dec 2012, at University of Edinburgh. School of Geosciences.
Research entitled: “Biomass Micro-Generation Systems in Urban Areas:
Waste to Energy Self-Production Systems as Potential Drivers for Social Transformation”. Then, she made a pause in her scholarship in re-structure her approach and to support special R&D project related waste to energy (bioenergy systems). Her contribution to this project was involving R&D team with stakeholders and public fundraising process in Milpa Alta Delegation, Mexico City. The project was entirely funded by the SECITI-Secretary of Science and Technology of Mexico City, Mexico City Government. In January 2015, she retakes her scholarship to continue the Ph.D. Studies in Valencia, Spain, at Universitat Politècnica of València, INGENIO (CSIC-UPV)/ in the Design, Manufacture and Management of Industrial Projects program, with the thesis entitle: “Team collaboration capabilities as drivers for innovation performance: The case of Spanish technology-based startups”. Supervised by Dra. Mónica Edwards Schachter - INGENIO [CSIC-UPV]. Dra. Anabel Fernández Mesa - Universidad de Valencia, Dr. Pablo D’Este Cukierman - INGENIO [CSIC-UPV]. 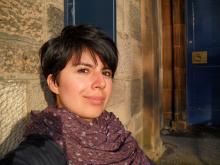